PCB’s from window caulking were evaluated and remediated separately by the CTARNG and were not in the scope of work.

Overall, no groundwater RCRA 8 Metals, SVOC or VOC concentrations were reported above the listed screening levels. Low levels of total metals were detected but did not warrant further evaluation by TCLP or SPLP analytical methods.

The MIP and DPT soil investigations did not identify significant site-wide soil impacts. Existing soil COPC concentrations that were detected at low concentrations at two locations (DPT-13 and DPT-18) are not likely to result in future groundwater impacts. 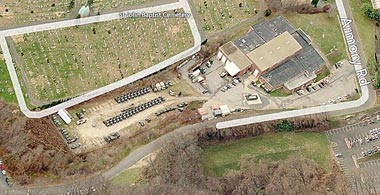 Based on the RI results only one RAO was identified for the Site. The RAO identified was for soil media within the military vehicle parking area. A detailed analysis of alternatives was completed to select the appropriate remedy for the site. Excavation and Off-Site Disposal is the most practicable permanent solution for the site.

The real-time MIP and EC data were evaluated in the field to determine additional survey locations and to establish soil sampling intervals and monitoring well screen intervals. The soil sampling program consisted of 25 MIP probes, 38 DPT soil samples and 8 MW split spoon samples. The MIP’s, DPT’s and MW’s were each drilled to refusal on assumed bedrock. The depth to bedrock at the site varied from 0 feet bgs (exposed bedrock) to approximately 27 feet bgs.

Groundwater was not encountered within the vehicle parking area where the shallow depth to bedrock varied from 0 to 8 feet bgs. Groundwater was observed to fluctuate seasonally across the overburden/bedrock interface. 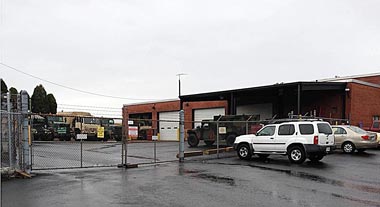 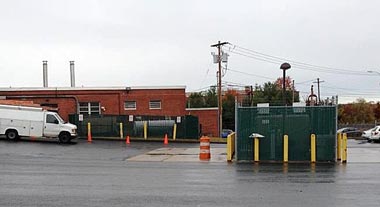 A total of forty six (46) soil samples (38 DPT soils samples and 8 MW soil samples) were submitted for laboratory analysis for RCRA 8 Metals, SVOC’s and VOC’s. Several of the RCRA 8 Metals, and in particular for this site, arsenic, are naturally occurring inorganic constituents most of which are expected to be present naturally in the environmental media tested during the RI. No VOC’s were reported above the listed screening levels. Groundwater samples were analyzed for RCRA 8 Metals, SVOC’s and VOC’s.

The ADR electronic Quality Assurance Project Plan (eQAPP) incorporates laboratory quality control criteria, and was used to validate the data. The data from each SDG was processed through the ADR processor and qualification and outlier reports were produced. A review of the qualifiers added by the ADR program was performed on randomly selected sample results in order to confirm identified outliers and identify any omissions from the validation performed by ADR.NET.

A baseline human health risk assessment (BHHRA) was conducted. The BHHRA was completed in accordance with EPA’s guidance (RAGS: Part D), with consideration of CTDEEP’s Remediation Standard Regulations (RSRs). No potential hazard was identified for Site groundwater, surface water, and sediment. Therefore, these media were not quantitatively evaluated in the BHHRA.

Other articles in Site Assessment