The site is an 84-acre former wood preserving facility that operated from 1958 to 1991. The site was heavily impacted with creosote DNAPL. The primary chemicals used were creosote, copper chromium arsenate (CCA) and pentachlorophenol (PCP). The subsurface was impacted with thin stringers of dense non-aqueous phase liquid (DNAPL) and dissolved-phase and adsorbed-phase constituents of concern (COCs). Dissolved-phase COCs consist of naphthalene, PCP, and semi-volatile organic compounds (SVOCs).

The project area is contiguous with several utilities and encumbrances: a major gas main, high-voltage overhead electric lines, a railroad line, and a tidal creek. Slurry walls keyed into a clay confining unit 55 feet bgs were installed to contain the majority of the plume but could not contain the full extent due to the railroad and gas main locations. As a result, the ISCO remediation was selected in the ROD to address soil and groundwater impacts outside the slurry wall.

The COCs at this site are known to be challenging to remediate, particularly due to the low target cleanup levels. ISCO bench testing and a subsequent field pilot test were conducted to determine proper dosing of ozone and hydrogen peroxide to treat the COCs located beyond the subsurface engineered vertical barrier wall. 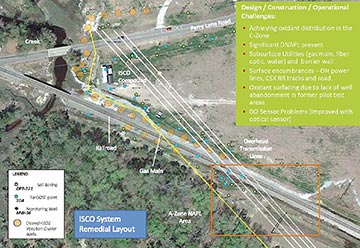 The pilot test area was chosen due to its historically higher concentrations of COCs than other areas of the Site.

FSE designed and oversaw the installation of 110 injection wells as part of the full-scale implementation. A combination of single, dual and tri-zone injection well clusters were used for injection. In addition, over 20 performance monitoring wells were installed within and downgradient of the injection well network. Soil borings revealed the presence of isolated NAPL stringers. TarGost laser induced fluorescence vertical profiling, along with confirmatory DPT soil borings, was used by B&V during the system operation to delineate hot spots at the site. 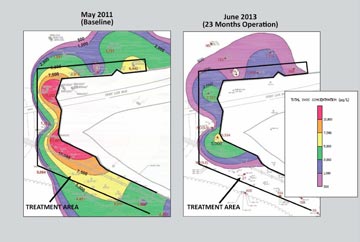 FSE/GES performed extensive quarterly sampling for SVOC’s and field monitoring for DO, ORP, and multiple other parameters. Concentration contour maps and limited 3-D visualization were used to illustrate the reductions in SVOC over the 23-month injection period.

Wetland surface sediments and nearby upland surface soils were monitored weekly for the presence of ozone and hydrogen peroxide, and other evidence of leaks or surface breakout from the system. Vapor intrusion was not a concern at this site given that no occupied buildings are located in the general area.

All soil and groundwater samples were analyzed by a DoD-ELAP certified laboratory. Tier II data validation was performed by B&V with review by FSE/GES. FSE/GES prepared quarterly concentration contour plots and trend graphs for individual COCs. Monthly field downhole multi-parameter sondes were used and the field data was correlated with the lab results. 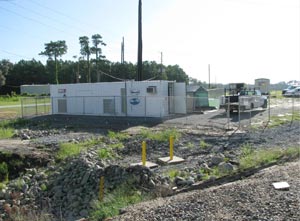 A large portion of the Site was previously contained through the use of a slurry wall and an engineered cap. However, additional NAPL and dissolved-phase impacts were detected outside of the slurry wall. The current remedial goal for these impacts outside of the capped area is the attainment of drinking water standards for three consecutive years evidenced by groundwater sampling.

The ISCO system included an 80 pound/day ozone unit, hydrogen peroxide injection system, and 110 injection wells. The ISCO system operated from July 2011 to December 2013. Eight injection headers were used with header pipe size and number of injection wells per header determined during the engineering design. The on/off cycling schedule for each header was determined at startup and evaluated during monthly optimization visits. FSE/GES performed once to twice weekly O&M site visits during system operation and remotely monitored the system via the PLC controller.

FSE provided onsite oversight during construction of both the pilot and full-scale remediation systems.

Other articles in Site Remediation